This article was translated from our Spanish edition using AI technologies. Errors may exist due to this process.

Opinions expressed by Entrepreneur contributors are their own.

While the world is struggling to find answers to almost everything amidst uncertainty and the fall of deeply rooted paradigms, we are witnessing a pivotal moment for humanity that, although it is not known where it will lead, if you are prepared to take advantage of it, it can be an instance of growth like no other.

Beyond difficulties and conjunctures, we hear more and more talk about consciousness . What is it about? According to the dictionary definitions, “it is the ability of the human being to recognize the surrounding reality and to relate to it, as well as the immediate or spontaneous knowledge that the subject has of himself, of his actions and reflections.” From a spiritual perspective, consciousness is a heightened state of being, which can help to successfully solve problems of meaning about life.

As an example, it is awareness to listen to your own emotions, make decisions in full use of your internal and external resources, go within yourself, “introspect” wisely to find answers.

The needs that Maslow raised

Maslow’s pyramid, or hierarchy of human needs, is a psychological theory proposed by Abraham Maslow in his 1943 work “A Theory of Human Motivation, ” which he later expanded.

This theory focuses on five levels, like a pyramid. At the base are the basic needs, fundamentally physiological, that allow maintaining homeostasis to survive: for example, breathing and air quality, water and hydration, food, rest, avoid pain, maintain body temperature.

Then, security and protection needs , both in terms of physical and health, as well as resources such as housing, sustenance to live and employment.

Climbing the pyramid, social needs appear, represented by affective development, association and affinity with others, affection and sexual intimacy.

Next, the need for self-esteem . Maslow defined them as tall, characterized by self-respect, with feelings such as self-confidence, mastery, achievement, independence, and freedom; and a loss, related to the need for attention, appreciation, recognition, reputation, status, dignity and success and even fame. If these needs diminish, an attitude of low self-esteem and feelings of inferiority are reflected.

At the top of the pyramid appears the need for self-realization , focused on the development of their potential; in unlocking creativity and innovation, and in being able to realize their projects and ideas. Maslow also called them growth motivation and the need to be, and affirms that it is the highest psychological need of people, since it allows us to connect with the meaning of life. It is achieved when all the previous levels have been reached, or at least advanced to a certain point.

The 7 levels of consciousness

Building on Maslow’s work, British author Richard Barrett developed the theory of universal stages of evolution, and the concepts of personal and cultural entropy (transformation). At the same time, he created different evaluation methods to measure levels of values in people, companies and communities, including the 7 levels of consciousness.

Making certain parallels with the pyramid of 1943, Barrett marked 7 phases of consciousness with small differences depending on whether it is a person, an organization, a society; it even applies them to leadership consciousness.

The 7 levels of consciousness that Richard Barret raises are:

Level 1: Survival (in Maslow these would be levels 1 for physiological needs, and 2 for security). Here the focus is on guaranteeing survival not only physiological -health, eating, sleeping-, but also safety -income, housing-. It is a tangible, physical, concrete level. The first three levels are called “self-interest” by Barrett.

For companies, it would mean being aware of occupational health, having the appropriate structure to function, and obtaining benefits and profitability. Also in achieving and measuring the balance of satisfaction with the collaborators, and in guaranteeing the sustainability of the businesses as a means to be able to function, without ceasing to think about a more transcendent objective.

Level 2: Relationships (in Maslow it is level 3, social needs, affiliation): it focuses on affection and belonging to a tribe (groups, teams, affinities).

If we transpolate it to the organizational world, it is reflected in loyalty, the internal climate, the value chain. Also with the interaction with others with similar interests, social relationships, affiliative links with other representatives of the sector, fostering agreements, alliances and common business.

Level 3: Self-esteem – esteem (it is related to that same level, which is 4 in Maslow’s pyramid): it has to do with affection, prestige, respect, and with the recognition of others and of oneself; also, with achievement and differentiation, from the construction of self-leadership and self-confidence.

For companies, this level reinforces the self-esteem that it is possible to achieve great achievements working as a team. Also here are the stimuli of extrinsic motivation such as the emotional salary -which is not remunerative-, in the form of congratulations, recognition and listening skills. Used well, quality feedback can also foster corporate self-esteem, as well as continuous improvement of processes, quality and good practices, ethics and shared values.

Level 4: Transformation (connects with level 5 of self-realization). Here Richard Barrett creates 4 levels of consciousness, this being the trigger for higher levels pursuing the common good.

It is about personal development, evolution, lifelong learning and the unfolding of potential. It is a stage of evolution and learning from the permanent desire to question, search and explore in consciousness.

When we bring it to the world of organizations, this translates into the need for continuous evolution, reinvention, and innovation. It could be said that the cultural change in a company begins at this level of consciousness. To achieve this, they will need to work on team cohesion and on generating improvements and challenging opportunities that transform challenges into collaborative learning; and in generating transversal transformations.

Level 5: Internal cohesion (related to level 5 of self-realization) Following Barrett’s 4 higher levels of transformation of consciousness, the intention is to work on leaving the individualistic mode of the “I” to go to the encounter of a “we”. It applies to both individuals and companies. Here appears a consciousness of shared vision, where there are values at stake that are the ingredients that unite them: trust, integrity, honesty, communication, authenticity.

Companies can work on these aspects, generating opportunities for meetings, teambuilding , attracting the best available talent, and generating a community that creates a strong and solid culture, consistent and sustainable over time. Embracing a common cause often achieves this cohesion.

Level 6: Contribution (also related to Maslow’s level 5 of self-realization) This is about focusing on the contributions of value that, as individuals, we make to society. They can be thought of as part of the legacy left by living in the world, that is, leaving a mark.

In companies, it is possible to focus on these value contributions directed towards the customers of the products and services; towards suppliers, distributors, etc., and, of course, towards the internal public: collaborators at all levels. For example, providing equal opportunity treatment to suppliers viewing them as strategic partners is part of this spirit of contribution, and raises the level of consciousness since it goes beyond the merely transactional (I give you = you give me). In time, this generates an increase in the level of consciousness and is connected to the transcendent legacy. The result over time will be to leave a mark on the market segment where they operate.

Level 7: Service (complements the same level 5 from Maslow). Here people connect with a greater purpose: Why did we come to this world? What is my role? What legacy am I going to leave?

In the business world, it is the level of consciousness to solidify in the long term through ethics, to think about the generations to come, to make valuable contributions to humanity; in corporate social responsibility and in friendly dynamics with the environment and inclusion policies of all kinds. It is thinking of acting for the greater good, not just petty self-interest. 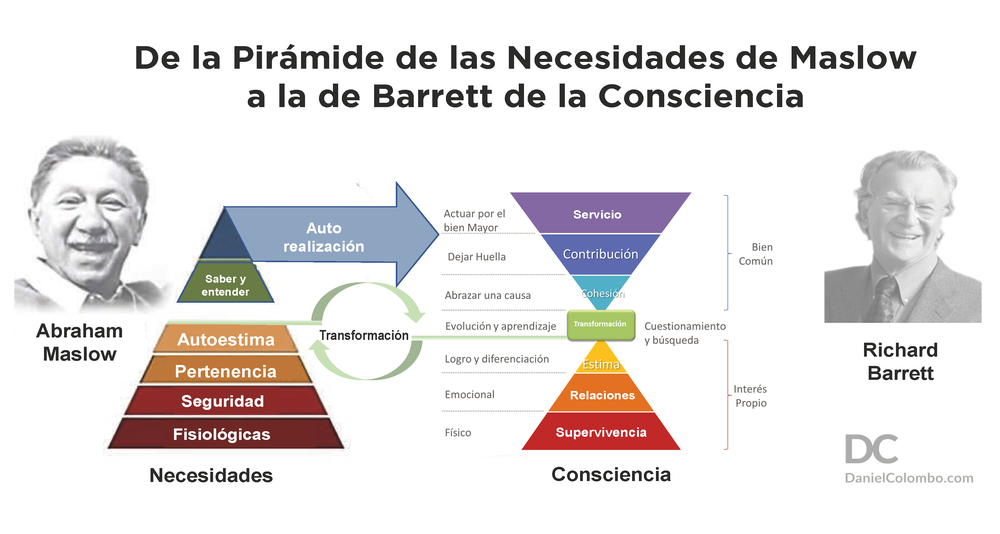 As you may have observed, levels of consciousness are values, and values are transformed into culture, whether you work on it personally or as a company.

It is a gradual process, which needs the same as all good construction: strong pillars. The suggestion is to allow time for the process, and allow individual and collective maturation at your own pace.

The end result will be greater coherence, a feeling of internal well-being and greater responsibility and commitment; because there is no going back once consciousness has been raised. You can lose your way at times, although consciousness will always be a guide to get back on track.

How We Got More Than 10,000 Students from 120 Countries to Embrace the Joy of Coding

Learn How to respond efficiently to bad reviews